Divadlo SoLiTEAter > D Wright: I Am My Own Wife

D Wright: I Am My Own Wife 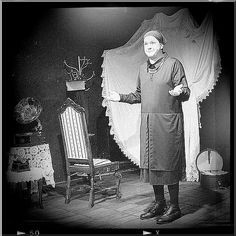 Based on a true story, and inspired by interviews conducted by the playwright over several years, I AM MY OWN WIFE tells the fascinating tale of Lothar Berfelde, a real-life German transvestite who dressed as a woman and under the name of Charlotte von Mahlsdorf managed to survive both the Nazi onslaught and the repressive East German Communist regime. The text was awarded the 2004 Pulitzer Prize.

CHARACTERS: (in order of appearance)

DURATION: ca 140 minutes incl. a break following the Act One

The main character, Charlotte von Mahlsdorf (born as Lothar Berfelde) is the most known east-German transvestite. He was born on March 18, 1928 in Mahlsdorf (Berlin suburbia) and died on April 30, 2002 at the same place. As a collector of decorative arts and items from so called Gründerzeit era (1890-1900) he founded a famous Gründerzeit Museum. In 1992 he was awarded the German Cross of Honour.

The author Doug Wright is an important American contemporary dramatist, film script-writer and librettist (Unwrap your Candy, Watbanaland, Wildwood Park, The Stonewater Rapture, Grey Gardens etc.). He received the Obie Award for his play Quills, also famously cinematized. He is an in-house dramatist at New York Theatre Workshop. For his play I am My Own Wife he was awarded the 2004 Pulitzer Price for the best drama.